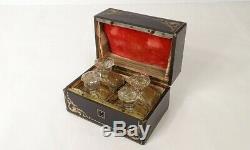 Add this store to favorites. Boxed odor blackened wood decorated with acanthus leaves and consists of four bottles adorned with gilded acanthus leaves. The box is signed alph giroux paris. Note a few small chips on the bottles visible in the pictures. Alphonse Giroux was initially steered towards painter career under the direction of Jacques-Louis David, but he abandoned his brushes for a merchant activity tables and furniture and art objects. From 1799 to 1848, it operates at No. 7 rue du coq-Saint-Honoré in Paris.

Giroux in Paris, his store became a famous fancy goods shop and cabinet which radiates activity of the consulate at the end of the Second Empire, with the father and the son. The cabinet shop began in 1799, the father died in 1848 and his two son Luis succeeded in the direction of the workshops and the shop. Their specialty was making very little upscale furnishings for the bourgeoisie and nobility. It was at that Giroux Charles X and Louis xviii chose New Year's gifts to the young princes: the Mount Princess and the Duke of Bordeaux. Alphonse Giroux won numerous national and international awards, including a silver medal at the 1834 exhibition, and became in the second half of the nineteenth century a true reference for the boxes, various cabinets and varied and small furniture approval or write.

One son, Alphonse-Gustave, continued its activity. Another, André Giroux, said brushes abandoned by his father.

The item \The seller is \This article can be shipped worldwide.