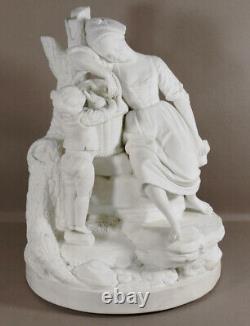 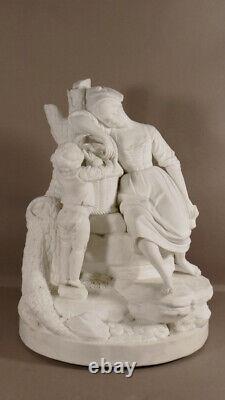 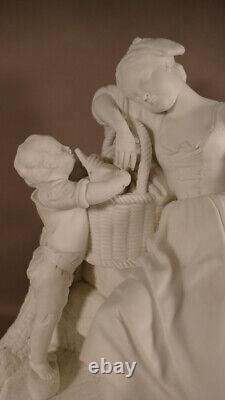 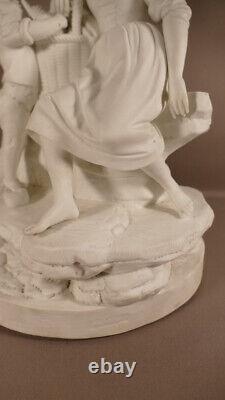 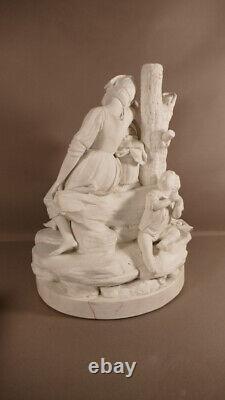 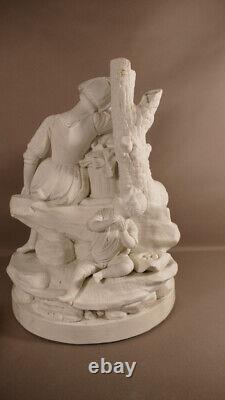 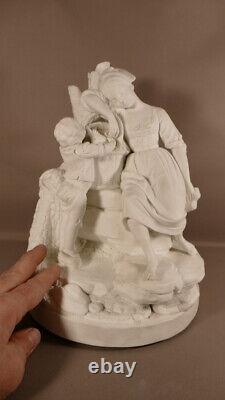 Superb group in three-figure porcelain biscuit representing a young boy drinking with a gourd exceeding the basket of a young woman dormant against a tree trunk, a child playing with apples in the back. Working group with a good quality of execution. The end of the hat filled with apples at the back of the group taken from plaster, original cooking slots.

In the 1770s and 1780s, several porcelain factories settled in the north betting between the faubourgs saint denis, of the temple, but also in Montmartre or near the rue de provence. In order to protect themselves from the monopolistic claims of the royal soap factory, they came to seek the protection of powerful princes. This was the case with the manufacture which we are now interested in: that of the Duke of Angoulême. If, like me, you are not familiar with the princely titles during the reign of louis xvi, I can tell you that the Duke of Angoulême was the son of a brother of the king, the Count of Artois. The latter will remain in history as charles x, the last bourbon monarch.

As such, the Duke of Angoulême was one of the suitors to the throne of france after the revolution of 1830. "one of the most important betting factories" here is the flattering description of this factory, charles ernest guignet in its treatise on ancient ceramics.

It was installed in the street of Bondy, as it was then called, reborn baker street, with its serpentine shape right next to the boulevard saint martin, close to the Place de la République. Recall that the Count d'artois was a great protector of French porcelain, having his wing a manufacture of the faubourg saint denis, close to the one that occupies us here. The entrepreneurs of the Duke of Angoulême's manufacture: guérhard and dihl as you can imagine it was not the prince who managed and operated the factory. He was just patronizing her and giving her the opportunity to use her initials. As the guignet reports, the first managers were guérhard and dihl. Until the revolution, they signed their products with an oval stamp containing the duke's figure, topped by the prince's crown. Then, after the revolution, this patronage was no longer of any use. Also, they replaced the mark with "mm. Of course, at the restoration, even though they were still active, they resumed the reference of the Duke of Angoulême: "manufac to mg the Duke of Angoulême bets.

This item is in the category "art, antiques\art of xixe and before\sculptures, statues". The seller is "legrenierdugustine" and is located in this country: fr.