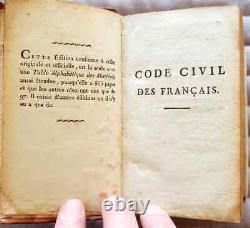 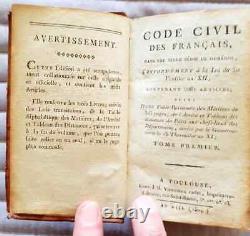 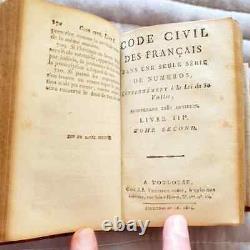 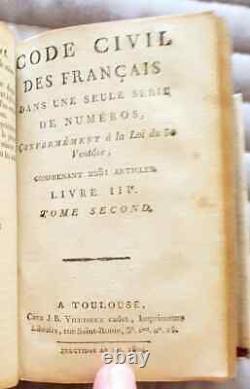 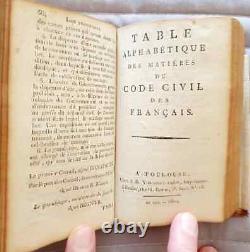 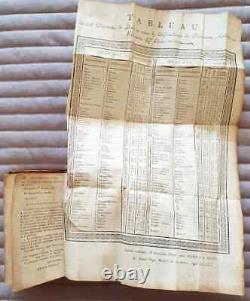 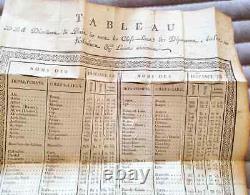 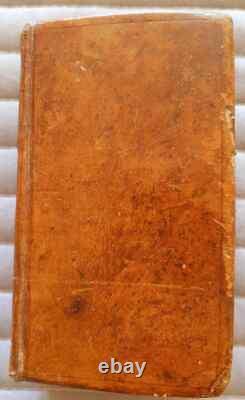 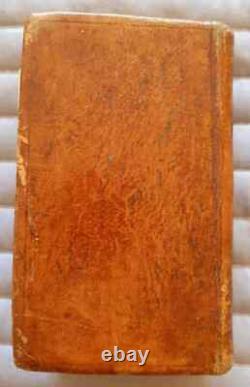 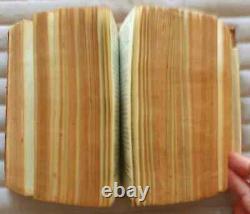 Civil Code of the French an xiii - 1804. (First edition of the Civil Code of the French became the Napoleonic Code in 1807). D a single series of numbers, in accordance with the law of 30 ventose an xii, containing 2281 articles. Followed by a reason table of 365 pages material. The stop and table of the distances (outtext leaflet) of betting to the heads places of the departments, arrested by the government on the 25 thormidor an xii.

Bookstore, rue saint rome, 3rd, son, n°15. Small format in-18°, (14.5 cm x 9 cm) connects, xxxv + 932 pages. Complete of the two volumes connected in one volume. Barely vested with consular power, Bonaparte signed on 24 thormidor an viii a decree appointing a four-member commission to study the previous work and draft a civil code. Two northern jurists who are familiar with French customary law: trunchet and bigot de preameneu, and two midday jurists who are specialists in Roman law: malleville and portalis who presented the project in a well-known preliminary speech.

The project was quickly completed in four months. In accordance with the draft constitution and the observations of the courts of cassation and appeal were studied by the State council or the first Bonaparte consul took part in the deliberations..

it is certain that by his energy he greatly activated the work of the jurists. He also surprised the most experienced technicians with his judicious remarks. The role of the second consul, cambaceres, eminent jurist author of the three previous unsuccessful attempts to codify, must be noted. Presented at the sleek tribune the draft was voted with a rather rapidity: 36 laws were passed and then brought together in a single body under the name "Civil Code of the French" by the law of 30 Ventôse an xii (21 March 1804).

The drafters of the code also retained the achievements of the bourgeois revolution from 1789 to 1791 by rejecting the extreme laws passed between 1792 and 1795, "in vain sophisms denied by obviousness". While some criticisms have been made of the civil code plan, the style is remarkable, precise and stripped. In his mind the civil code is "Napoleonian", settling all matters of interest to the individual and the family: birth, marriage, divorce, sharing, successions of death, restoring in its entirety the cohesion of the legitimate family, dismantled by the revolutionary laws of Montane, and the authority of the father and husband, heads of family. "bourgeois", the civil code also mentions property as an inviolable and sacred right with the secret desire to protect purchasers of national property, but also to be able to adjust the right of ownership through the intervention of law or regulation. Another tribute of the Napoleonic legislator to the individual freedom of man, the official recognition of the autonomy of freedom in the drafting of contracts. The Civil Code is revolutionary in that it enshrines legality before the law, freedom of conscience and freedom of work, secularism of the state. A real compromise between the ancient customs of the old regime, Roman law and revolutionary law, the Civil Code of the French of 1804 (now and entitled from 1807 to 1814 Napoleonic code in the French empire) is the "central monument where the modern jurist is constantly reduced". Maintained without major changes, except the abolition of divorce, until the 1880s, the Civil Code has since that date undergone multiple repleasures to take account of the profound changes in society, but it has not yet been affected by the general structure. A testimony of the value of the civil code is given by the influence he exercised abroad where the Napoleonic conquests were "exported" in the countries occupied by the great army: in Rhineland he remained until the end of the 19th century; in Belgium and in Luxembourg it is still largely in force; the civil law of many holland, Germany, Switzerland, italia, etc.

Was imbued with the civil code of the French. First built in 1804 by the will of the first Bonaparte consul. The Civil Code or Napoleonic Code is, according to the very formula of the emperor has Saint-Helene, one of the "masses of granite" accrediting forever the new social order from revolution and empire in the French society.

Beautiful binding, very fresh and impeccable interior. This very practical small pocket format was at the time very popular and very used by all legal practitioners, magistrates, lawyers, confessors, notaries, etc. Rarity of the civil code an xiii 1804 (original edition) with the famous analytical table of 365 pages (most of the other editions of 1804 have only 97 or even 60 pages of table) while Bonaparte has just been proclaimed emperor (May 1804). Very research, the edition reference.

Payment possibility at more times free of charge: consult me. I put works on Napoleon for sale; to find them easily, type c1 Napoleon in the search engine of this site. The item "c1 napoleon civil code 1804 toulouse connects full leather of rare time" has been on sale since Wednesday 17 March 2021.

It is in the category "books, bd, magazines\old books, collection". The seller is "cariou1" and is located at/in grenoble. This item can be delivered anywhere in the world.